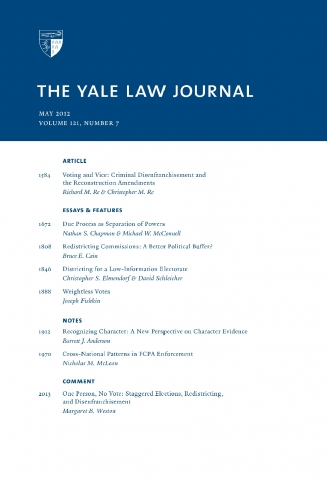 Foundling Fathers: (Non)-Marriage and Parental Rights in the Age of Equality

The twentieth-century equality revolution established the principle of sex neutrality in the law of marriage and divorce and eased the most severe legal disabilities traditionally imposed upon nonmarital children. Formal equality under the law eluded nonmarital parents, however. Although unwed fathers won unprecedented legal rights and recognition in a series of Supreme Court cases decided in the 1970s and 1980s, they failed to achieve constitutional parity with mothers or with married and divorced fathers. This Article excavates nonmarital fathers’ quest for equal rights, until now a mere footnote in the history of constitutional equality law.

Unmarried fathers lacked a social movement of their own, but various groups and interests fought for their own causes on the battleground of nonmarital parenthood. Nonmarital fathers’ claims posed a particular dilemma for feminists, who promoted gender-egalitarian parenting within marriage but struggled over the implications of unmarried fathers’ rights for women’s autonomy and for substantive sex equality. The Justices’ deliberations, in contrast, focused on the rights of men and on ensuring the smooth functioning of adoption procedures. The Court largely avoided the feminist dilemma, instead framing cases as disputes between husbands and unwed fathers. Denying nonmarital fathers’ request to be treated as “de facto divorced fathers,” the Court reaffirmed the legal supremacy of marital families.

The Court’s failure to engage difficult questions about substantive sex equality reverberated beyond the parental rights cases to leave its mark on the twenty-first century jurisprudence of citizenship. As nonmarital parenthood becomes the American norm, recovering its constitutional history illuminates how and why marital status still delimits the boundaries of equality law.