A Roundtable on Iran Uprising: Silenced Voices and Political Struggle of Minority Groups in Iran and Diaspora

Join us for a vital discussion with women scholars and activists of minority groups from Iran to discuss their grienvances with--and positions within-- the current uprising. We will gather for the first time on this panel to reflect on Jina (Mahsa) Amini's state murder and the protests sparked by her death.

This panel will draw attention to the critical status of women in minority groups and the marginalization of their identities and voices in the current protests.

Haifa Sara Asadi holds a master’s degree in electrical engineering and an Ahwazi women’s rights activist. She is an intersectional feminist with years of experience in advocating for minority groups in Iran with special focus on Arab women of Iran. She is currently based in the United States.

Sepid Birashk (She/They) is a doctoral researcher at the excellence cluster "Temporal Communities" at the Freie University of Berlin. Sepid has studied philosophy and comparative literature in Tehran, Freiburg, Berlin, and Oxford and is currently working on a thesis on non-linear temporalities in classical German philosophy in connection with poetical, female, and non-Eurocentric ontologies. Sepid is an active member of LGBTQ network in Berlin.

Fariba Baluch wasborn and raised in Sistan and Baluchistan and has worked as a schoolteacher across this province for years. She is the founder of the first rehabilitation healthcare center for women in south of Baluchistan. She is a Baluchi women’s rights activists and is currently based in London, United Kingdom.

Dr. Farangis Ghaderi is Research Fellow and Joint Director of the Centre for Kurdish Studies at the Institute of Arab and Islamic Studies of the University of Exeter. She is the Principal Investigator of the Kurdish component of the Digital Archives of the Middle East (DAME) Project at Exeter. Dr Ghaderi is co-editor of Women’s Voices from Kurdistan (2021) and author of several peer-reviewed articles on Kurdish literature and culture. She is Associate Editor of the Kurdish Studies Journal and has also worked as independent Middle East consultant and Expert Witness in the UK

Maaman Rezaee is assistant Professor of Film Studies at the University of New Mexico and an Iranian-American filmmaker working on issues such as exile, geopolitics and transcultural dynamics. She has written and directed films such as Evanescence (2022), Family of Too Many (2018) and Minuet for A Disappearance (2016). Before emigrating to the United States, Maaman attended Baha'i Institute of Higher Education, an underground university for Baha'is, a religious minority in Iran not allowed in state universities.

Moderator: Fatemeh Shams is a poet and assistant professor of Persian literature at the department of Near Eastern Languages and Civilizations and a core faculty member at the Gender and Women Studies Program at University of Pennsylvania. Since 2009 Green Uprisign in Iran, Fatemeh has been living in exile. She has published three poetry collections and a critical monograph, A Revolution in Rhyme: Poetic Co-Option Under the Islamic Republic (Oxford University Press, 2021).

This event is Co-sponsored by the Department of Near Eastern Languages and Civilizations & Gender, Sexuality and Women’s Studies Program at University of Pennsylvania 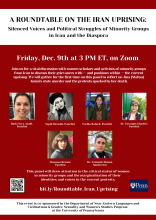