Thomas Henry "Hank" OwingsBetween Freedom and Desire: Toward a Democratic Ethos in Sex

Discussions around the monkeypox pandemic and LGBTQ susceptibility instigated debate around whether or not it’s “homophobic” for public health officials to call for sexual restraint. In this paper, I argue that this debate is part of an ongoing tension within queer and feminist theory between those who advocate for a libertarian sexual ethic – that freedom to pursue sex without constraints is liberatory – and those who propose that sexuality needs social constraints. Drawing on second-wave feminism and recent discussions within feminism around consent, I argue that democratic concerns are valid appeals by which to constrain sex and are not reducible to conservative, anti-sex positions. I thus argue against the libertarian ethic of sex in segments of queer theory (especially gay male theory) that posit free sexuality as a good in itself.

Lucila Rozas Urrunaga
"Grief, desire, reparation: the production of the feminist affect and the feminist
subjectivity in Maria Pía López’s 'Not One Less'"

Collective mourning set the starting point of a new feminist tide represented by the Ni
Una Menos (Not One Less) movement, which initiated a series of actions to protest
against the systematic and cruel killings of women in Argentina. The tide has been growing
ever since, refusing territorial and political boundaries, and expanding its influence
throughout Latin America and worldwide. While the rising of the tide has not yet
concluded, Maria Pía López, activist, and chronicler of the movement has intended to
provide an open, first-person account of Ni Una Menos in her manifesto Not One Less:
Mourning, Disobedience, and Desire. I intend to analyze this document as an affective
object that is both representation and performance in itself. As a representation, I focus
on the repertoire of people, places, actions, and feelings that she associates with the
movement to provide a glimpse of the emotional habitus that influences feminist political
action. As a performance, I focus on the way this representation aims to generate the
potential for the re-emergence of feminist affect and the assembling of an ever-expansive
feminist subjectivity and practice that animates political struggle. I argue that the idea of
the brown commons, as delineated by José Esteban Muñoz, allows an understanding of
feminist subjectivity as assembled from the transmission of the sense of fragility and the
related feelings that emerge when feminized bodies, places, and objects touch. Finally, I
conclude that the manifesto engages in a reparative reading, acknowledging, and aspiring
to capture the desire for mutual touching that takes place during demonstrations. As such,
it intends to open the space for the proliferation, amplification, and futurity of this
feminist tide and its political subjects. 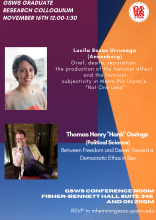