The Art of AIDS

2021 marks 40 years since a new viral agent with an unknown etiology emerged and instigated a global pandemic, now known as HIV. During and beyond the early years of the HIV/AIDS crisis, people with AIDS, activists, chosen families, allies, and advocates formed networks of care and communities of knowledge that contributed information, counseling, and guidance to the public concerning AIDS when governmental & other institutional knowledge sources on health failed to do so. Indeed, the history of AIDS is inseparable from the manifold ways the epidemic was ignored, naturalized, and horrifically, even welcomed, as an agent of “social cleansing.” In the face of this onslaught, networks of care addressed practical issues in clinical trials, healthcare policy, and preventative measures, but also intervened in the political sphere through aesthetic projects. Organizations and collectives like the AIDS Coalition to Unleash Power (ACT UP) and its arts affiliate Gran Fury, the Women’s AIDS Video Enterprise (WAVE), the Haitian Coalition on AIDS, among many other groups, produced erotic videos that featured discussions on safer sex practices and consent; distributed flyers dispelling misinformation about the communicability of AIDS; and created pamphlets and other materials to circulate best practices for caring for someone living with AIDS. But they also actively contested the dominant ideologies that subsumed AIDS into phobic narratives around sexuality, race, class, ethnicity, religion, and “morality.” Such projects introduced a revolutionary aesthetics of care that had a material and structural impact on the HIV/AIDS crisis. This program considers the conditions of possibility that emerge out of the poetic, musical, visual, and performative aesthetics, broadly defined, of HIV/AIDS care work.

Nick Melloan-Ruiz, What Would an HIV Doula Do? 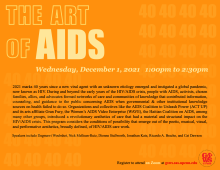