The Center for Research in Feminist, Queer, and Transgender Studies, The Institute of Contemporary Art, and the Department of Music present:

Opus Siniestrus concerns the outbreak of a virus that kills only women. Its protagonist, an old woman who carries with her at all times an ostrich egg, battles the patriarchy in the form of a Doctor, the Pope, Hitler and Superman.  Written in 1979, the play exemplifies Carrington’s environmental politics as well as her participation in the women’s liberation movement in Mexico City. Characters include 12 Cannibals, 3 Astronauts, a misgendered Ostrich and a Computer. Equal parts absurd performance spectacle and acute social critique, the play’s workshop production at Penn’s ICA gallery October 29th and 30th will be the first in its original language.

Funded by a Collaborative Provost Interdisciplinary Grant from the Sachs Program for Arts Innovation, the play will be performed and designed by Penn students, staff and faculty. It is being envisioned for the stage by The Headless Collective: artist-educator Joelle Estelle Mendoza, producer-musician Enix Inri (Ren Clark) and poet-playwright, Ricardo A. Bracho, former Sachs Artist-in-Residence of The Center for Research in Feminist, Queer, and Transgender Studies and Gender, Sexuality, and Women’s Studies Program and current Fellow at the Center for Experimental Ethnography. Performances will begin after dusk, following the surrealist maxim that, “The revolution begins at night.” 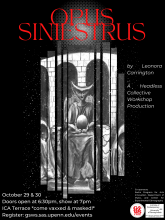