Lucas de Lima and Adjua Gargi Nzinga Greaves will present readings of their work and be in conversation with APC/GSWS Sachs Artist in Residence Ricardo A. Bracho as part of the Alice Paul Center's 2020-2021 program dedicated to Environmental Feminisms.

Florxal Review is a spacious investigative work of postcolonial ethnobotanical literary criticism. Greaves is inspired by language, machine aesthetics, documentation, systems analysis, radical education, investigative performance art, and Blackness. Through being and study, Greaves seeks to comprehend as the natural world does. She builds a way that generates entities exposed and engaged so that they may change.

Tropical Sacrifice is a wishbone against a fascist heart/a prophetic, dreamlike narrative based on the spiritual journey of a chicken. Typically used for sacrificial ritual in Afro-Brazilian religion, the chicken becomes a re-enchantment of the poet's mixed-race ancestry. Her superior vision gives access to genocidal and ecocidal histories, opening a portal to Indigenous, Afro-diasporic, queer, and nonhuman worlds.

Adjua Gargi Nzinga Greaves (New York City, b. 1980) writes ethnobotanical literary criticism, collages detritus into heraldic devices and has begun working with video in response to a Spring 2020 commission from Issue Project Room for their Isolated Field Recording Series. Her pamphlet Of Forests and of Farms: On Faculty and Failure was recently published by Ugly Duckling Presse, and her chapbook Close Reading as Forestry is published by Belladonna*. Greaves performs frequently across a broad spectrum of venues and has most recently been published in The Brooklyn Rail, and Letters to the Future: Black Women / Radical Writing (Kore Press). Formerly a Monday Night Reading Series curator at The Poetry Project, Site Director for Wendy's Subway reading room, and an artist-in-residence at Rauschenberg Residency, Greaves is currently based in New York City where she is Young Mother of The Florxal Review.
(photo credit for image : Jeremy Patlen Photography)

Lucas de Lima is the author of Wet Land (Action Books) and Tropical Sacrifice, forthcoming in 2021 from Birds LLC. His writing has appeared in PEN Poetry, Poetry Foundation, boundary2, Apogee, and Brooklyn Rail. He holds a PhD in comparative literature from the University of Pennsylvania and is the recipient of fellowships from the Social Sciences and Humanities Research Council of Canada and the Charlotte W. Newcombe Foundation. 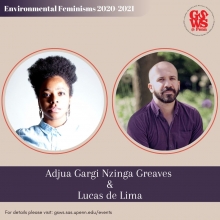