Join us for our Friday Works-in-Progress series with APC/GSWS Affiliate Faculty Pilar Goñalons-Pons as she presents her work: "Servants of Production: Politics of Domestic Workers' Labor Rights"

"Paid domestic work is a growing economic sector with over 71 million workers who have been commonly excluded from general labor law across the globe. Over 70% of these workers are women. This article studies the ideological structure underlying the legitimation of the widespread exclusion of paid domestic workers from general labor laws and how it is shifting. I examine transcripts of political debates in the International Labor Organization (ILO) 1912-2015 and in Spain 1975-2015 that deal with how paid domestic work is treated in general labor law frameworks. I show how arguments used in the two sites to either legitimize or challenge the exclusion of paid domestic work change over time in similar ways. Building on social reproduction theory, I argue that these changes represent a shift in how the ideological divide between “productive” and “reproductive” work is signified. I argue that this divide has shifted from being anchored in the separate spheres framework to being anchored on notions of racialized hierarchies of skill. My analysis shows that while the recent trend towards the inclusion of domestic workers under general labor law is important, the ideological structure that supports these changes also reinforces the divide between productive and reproductive labor and legitimizes the hierarchy that values productive work above all else. This must be challenged to achieve real change." 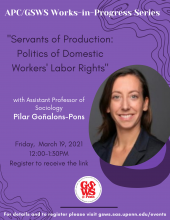