Elizabeth Otto is an art historian and the author of Haunted Bauhaus: Occult Spirituality, Gender Fluidity, Queer Identities, and Radical Politics and Tempo, Tempo! The Bauhaus Photomontages of Marianne Brandt, and the coauthor of Bauhaus Women: A Global Perspective. She has coedited five books including Bauhaus Bodies: Gender, Sexuality, and Body Culture in Modernism's Legendary Art School. Otto is Associate Professor at the University at Buffalo (SUNY), where she has also served as the Executive Director of the Humanities Institute. Her work has been supported by numerous organizations including the Alexander von Humboldt Foundation, the Center for Advanced Study in the Visual Arts, and the National Humanities Center.

The Bauhaus (1919–1933) is widely regarded as the twentieth century's most influential art, architecture, and design school, celebrated as the archetypal movement of rational modernism and famous for bringing functional and elegant design to the masses. In this talk, art historian Elizabeth Otto delves into the previously unexplored question of sexuality and gender fluidity at the Bauhaus by focusing on Bauhäusler who queered the school’s aesthetics in order to disrupt gender conventions, represent gay and lesbian subjectivities, and picture same-sex desire, moves that were not without risk during the Weimar Republic, a regime that criminalized homosexuality. By looking broadly at what Jack Halberstam dubs a queer way of life—one that encompasses “subcultural practices, alternative methods of alliance, forms of transgender embodiment, and those forms of representation dedicated to capturing these willfully eccentric modes of being”—this talk disrupts the narrative of a normative Bauhaus to yield a richer history that only emerges when we look at a new range of Bauhaus works and artists, and reconsider the questions that we ask of them. 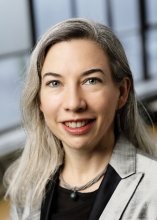