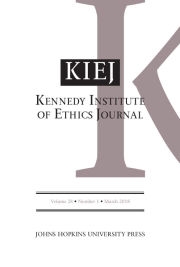 This article addresses the precarious place of transgender and gender non-cis persons in relation to their discrimination-protections in recent legal, medical, and ethical policies in the United States. At present, there exists a contradiction such that trans persons are considered "pathological" enough that they are included in the latest iteration of the American Psychiatric Association's Diagnostic and Statistical Manual (DSM-V) as "gender dysphoric," but they are not included in the category of "disabled" under the Americans with Disabilities Act (ADA). As such, trans persons in America are subject to the stigma of pathology (albeit with medical treatment) without the full protections of the ADA. By contrast, transgender and non-cis-gender Americans find their queer cohorts who are HIV-positive to be fully protected by the ADA. We ask whether transgender and non-cis-gender persons should embrace their (already pathologized) personhood as a disability. Sometimes "choosing disability" affords more rights than it deploys stigma.