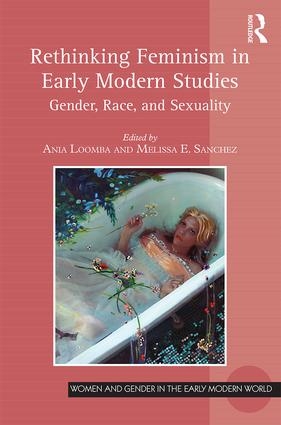 Rethinking Feminism in Early Modern Studies is a volume of essays by leading scholars in the field of early modern studies on the history, present state, and future possibilities of feminist criticism and theory. It responds to current anxieties that feminist criticism is in a state of decline by attending to debates and differences that have emerged in light of ongoing scholarly discussions of race, affect, sexuality, and transnationalism-work that compels us continually to reassess our definitions of ’women’ and gender. Rethinking Feminism demonstrates how studies of early modern literature, history, and culture can contribute to a reimagination of feminist aims, methods, and objects of study at this historical juncture. While the scholars contributing to Rethinking Feminism have very different interests and methods, they are united in their conviction that early modern studies must be in dialogue with, and indeed contribute to, larger theoretical and political debates about gender, race, and sexuality, and to the relationship between these areas. To this end, the essays not only analyze literary texts and cultural practices to shed light on early modern ideology and politics, but also address metacritical questions of methodology and theory. Taken together, they show how a consciousness of the complexity of the past allows us to rethink the genealogies and historical stakes of current scholarly norms and debates.