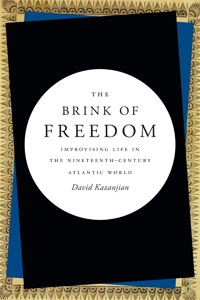 The Brink of Freedom, Improvising Life in the Nineteenth-Century Atlantic World

In The Brink of Freedom David Kazanjian revises nineteenth-century conceptions of freedom by examining the ways black settler colonists in Liberia and Mayan rebels in Yucatán imagined how to live freely. Focusing on colonial and early national Liberia and the Caste War of Yucatán, Kazanjian interprets letters from black settlers in apposition to letters and literature from Mayan rebels and their Creole antagonists. He reads these overlooked, multilingual archives not for their descriptive content, but for how they unsettle and recast liberal forms of freedom within global systems of racial capitalism. By juxtaposing two unheralded and seemingly unrelated Atlantic histories, Kazanjian finds remarkably fresh, nuanced, and worldly conceptions of freedom thriving amidst the archived everyday. The Brink of Freedom’s speculative, quotidian globalities ultimately ask us to improvise radical ways of living in the world.