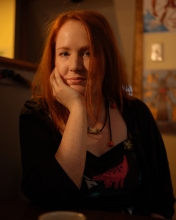 Dr. Sophie Lewis is a visiting scholar at Center for Research in Feminist, Queer, and Transgender Studies at the University of Pennsylvania, and a member of the teaching faculty of the Philadelphia branch of the Brooklyn Institute for Social Research. They are the author of Abolish the Family: A Manifesto for Care and Liberation (Verso Books, 2022) and of Full Surrogacy Now: Feminism Against Family(Verso Books, 2019), which Donna Haraway hailed as "the seriously radical cry for full gestational justice that I long for." Sophie's scholarship operates in the spheres of trans feminist cultural criticism and queer social reproduction theory, and their interests include utopian critiques of the family, Marxism, and Black and antiwork feminisms. Their research currently focuses on the etiologies of eugenic, bioconservative and imperial feminisms, including narratives of so-called white slavery past and present, femonationalism, and trans-exclusionary femocratism. A forthcoming book on this subject is tentatively entitled The Feminism of Fools: How Some Feminisms Hinder (Feminist) Liberation (Haymarket Books, 2024).
Dr. Lewis is a semi-independent scholar whose academic trajectory has been transdisciplinary ("undisciplined"). They are a graduate of Oxford University (initially at Wadham College for a BA English Literature; subsequently at St. Hilda's for an MSc in Nature, Society and Environmental Policy). As a Fulbright Scholar at the New School for Social Research in 2011, they earned an MA Politics. Finally, Sophie defended a PhD in human geography in 2016, at the University of Manchester. Since 2014, academic publications by Sophie have appeared in journals such as Feminist Review, Signs: Journal of Women in Culture and Society, Frontiers: Journal of Women's Studies, Gender Place & Culture, Antipode, Feminism & Psychology, Science as Culture, Society & Space, and Dialogues in Human Geography (Sophie's paper ‘Cyborg Uterine Geography’ serves as the anchor for a response forum). Sophie's non-academic writing, including an op-ed on “How British Feminism Became Anti-Trans" (The New York Times, 2019), has appeared in numerous venues including Boston Review, n + 1, Harper's, The Nation, The Baffler, Dissent, Logic, e-flux, and The London Review of Books. Sophie’s German-English translations for MIT Press include A Brief History of Feminism (Antje Schrupp) and Communism for Kids (Bini Adamczak). Their translation of Sabine Hark and Paula-Irene Villa’s account of femo-nationalist Islamophobia in Germany, The Future of Difference, is published by Verso Books (June 2020). Sophie is a member of the ecological writing collective Out of the Woods, whose edited collection Hope Against Hope: Writings on Ecological Crisis is published by Common Notions (June 2020). Until recently, Sophie was an editor at the feminist film criticism platform Blind Field: A Journal of Cultural Inquiry whose collection End/And: Feminization in Unending Times came out in 2017. You can follow them on Twitter at @reproutopia.