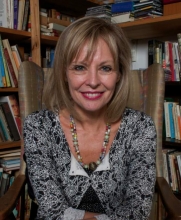 Rita Barnard received her Ph.D. from Duke University and is currently Professor of English and Director of the Undergraduate Program in Comparative Literature at Penn. She holds a secondary a position as Professor Extraordinaire at the University of Stellenbosch and has been a Visiting Professor at Brown University and a Mellon Distinguished Lecturer at the University of the Witwatersrand. For many years, she served as Director of Penn’s Women’s Studies Program and the Alice Paul Center for Research on Women, Gender, and Sexuality. Her scholarly interests lie in modernism and global modernities, South African literature and cultural studies, modern American literature (especially of the 1930s), contemporary cinema, and the novel as genre. In 2005 she received the Lindback Award for Distinguished Teaching, Penn’s highest teaching award, and, in 2010, the SAS Award for Distinguished Teaching in the School of Liberal and Professional Studies.