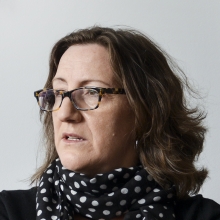 Nancy Bentley is Donald T. Regan Professor of English at the University of Pennsylvania, where she teaches courses on topics in American literature and culture, sexuality, kinship studies, and law and literature. Her most recent book is Frantic Panoramas: American Literature and Mass Culture, 1870-1920 (University of Pennsylvania, 2009). She co-authored Volume Three of the Cambridge History of American Literature (2005) and the Bedford Edition of Charles Chesnutt’s The Marrow of Tradition (2002). Her book The Ethnography of Manners (Cambridge University Press, 1996) examined the intersection of novelistic and ethnographic writing in the nineteenth century. She has served as Chair of the Penn English Department and is a recipient of the Lindback Award for Distinguished Teaching.

She has taught several graduate seminars on kinship and sexuality, including seminars examining how writing about and by indigenous people makes a difference in the way the concept of kinship circulated in the nineteenth- and twentieth-centuries. These teaching interests inform her current study, New World Kinship and American Literature, which examines how nineteenth-century print culture mediated kinship through the concepts of “clannishness” (associated with indigeneity) and “kinlessness” (associated with people of African descent in the Americas). Published or forthcoming works from that project include: