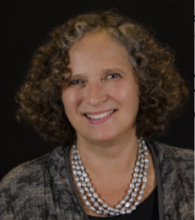 Kathryn Hellerstein is Associate Professor of Germanic Languages and Literatures, specializing in Yiddish, and the Ruth Meltzer Director of the Jewish Studies Program at the University of Pennsylvania.  Her books include a translation and study of Moyshe-Leyb Halpern's poems, In New York: A Selection, (Jewish Publication Society, 1982), Paper Bridges:  Selected Poems of Kadya Molodowsky (Wayne State University Press, 1999), and Jewish American Literature:  A Norton Anthology, of which she is co-editor (W. W. Norton, 2001).  Her monograph, A Question of Tradition:  Women Poets in Yiddish, 1586-1987, won the Barbara Dobkin Prize in Women’s Studies from the Jewish Book Council for the 2014 National Jewish Book Award, and the Modern Language Association 2015 Fenia and Yakov Leviant Prize in Yiddish Studies.

Hellerstein’s translations, poems, and many scholarly articles on Yiddish and Jewish American literature have appeared in journals and anthologies, including American Yiddish Poetry: A Bilingual Anthology (University of California Press, 1986), to which she was a major contributor. Hellerstein has received grants from the NEA, the NEH, and the Guggenheim Foundation, as well as from the Hadassah-Brandeis Institute, the Marcus Center at the American Jewish Archives, and the Center for Jewish Studies at Harvard. Her Women Yiddish Poets: An Anthology, is forthcoming from Stanford University Press.  Hellerstein is currently writing a book, China through Yiddish Eyes: Cultural Translation in the Twentieth Century.

Hellerstein’s teaching at Penn has long included an undergraduate Benjamin Franklin seminar on Women and Jewish Literature and a graduate seminar on Jewish Women Writers.  Her other courses on Jewish literature, film, and cultural history feature syllabi that integrate or emphasize works by women writers and cultural figures, as well as discussions that highlight gender in theme, history, and cultural analysis.  She has co-directed a dissertation in the Department of Germanic Languages and Literatures on the gender studies topic of mixed dancing in Yiddish and German Jewish literature, and is on the dissertation committee of another project on gender in Yiddish and Jewish American journalism of the early twentieth century.

Hellerstein’s publications, and future projects focus on, emphasize, and/or include women writers and cultural figures in Yiddish and Jewish American literature:

Paper Bridges:  Selected Poems of Kadya Molodowsky (Wayne State UP, 1999) is the first and only book of translations of the work of this major Yiddish poet.  Hellerstein’s monograph, awarded two major prizes (National Jewish Book Award and MLA Award), A Question of Tradition:  Women Poets in Yiddish, 1586-1987 (Stanford UP, 2014) is the first study to cover the range of Yiddish poetry by women from the early modern period through the twentieth century.  Hellerstein’s forthcoming Women Yiddish Poets: An Anthology (Stanford UP) is the first substantial collection of translations of Yiddish poetry by women from the early modern period through the twenty-first century.  She has edited a special issue of an academic journal, specifically on Women and Jewish Poetry: Nashim, 19 (June 2010), and co-edited a special issue of Studies in American Jewish Literature (SAJL): Jewish American Poetry (Spring, 2015), with an emphasis on women writers. As co-editor of Jewish American Literature: A Norton Anthology (W.W. Norton, 2001), she succeeded in including a large representation of women writers. Among her current projects is a study of Jewish American women poets as translators and anthologizers of Jewish literatures, which begins with the work of mid-19th century hymnist Penina Moise and extends to the feminist and queer works by Adrienne Rich and Irena Klepfisz.