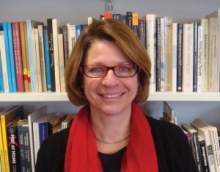 Christine Poggi was director from 2011-2014. During her tenure, Women’s Studies underwent its long overdue name change to Gender, Sexuality and Women’s Studies and the Core and Affiliated Faculty were formed. She left Penn in 2017 to become Director of the Institute of Fine Arts at New York University. Her current research projects comprise essays on Picasso's early constructed guitars; newspaper's function as a temporal marker in contemporary art; the nexus of law and image in the performative works of several contemporary artists (Michelangelo Pistoletto, Teching Hsieh, Santiago Sierra, and Chantal Akerman); and the multi-media "Meta-Futurist" project of contemporary artist Luca Buvoli. She is interested in the relations of modern art and technology, in how art engages mass publics, and in contemporary works of art that propose new models of avant-garde temporality and of social intervention.