How is sexual violence against women covered by the press? Media ethics and deontological approach in the Spanish context.

Beginning with a study of media coverage of the sexual assault known as the Pamplona's Wolf-Pack rape case in Spain, the present project deals with the media representation of violence against women (VAW) from a journalism ethics approach. The thesis evaluates the degree of deontological quality in view of the press’ social responsibility towards democracy, facing the role both State and media in the eradication of gender-based violence. 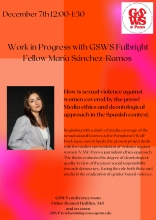