The reversal of Roe v. Wade will have significant implications for how colleges and universities provide reproductive care to students. This session will cover:

·the statutory & cultural history of abortion access for colleges students

Existing scholarship on family and nationality laws in the twentieth century typically leave the preeminence of European thought in modern legal systems unquestioned. This paper explores household registration as a practice that set imperial Japan apart from European models of empire, focusing on Japanese women in marriages with non-Japanese men to consider nationality in ways beyond jus sanguinis (blood relationship) and jus soli (birth within a particular country). I discuss Japan's 1873 legalization of international marriage and 1933 legalization of Han-Japanese intermarriage in colonial Taiwan to demonstrate how household registration, as a key aspect of the Japanese legal framework, granted individuals designated as the “head of household” authority to decide who to admit into or omit from the Japanese national/imperial polity. I argue that the household registration system was ahead of its time in safeguarding Japanese women's right to their own nationality by establishing the “status of being Japanese” as priority over one’s gender--it not only allowed Japanese women to become heads of their households but also permitted non-Japanese men's acquisition of Japanese nationality upon entering their wives' households. 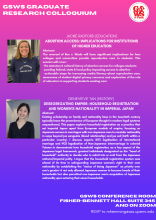