In recent years, science has been pushed to grapple with the social and structural systems that produce vast gender and racial/ethnic imbalances in academic participation. While current discussions largely focus on the role of people in positions of power (e.g., journal editors, grant reviewers and agencies, department chairs, and society presidents), many imbalances are in fact perpetuated by researchers themselves. A key example is imbalance within citation practices, where people from marginalized groups are broadly undercited, precluding an unbiased trajectory of scientific discovery. Because of the downstream effects that citations can have on visibility and career advancement, understanding and eliminating bias in citation practices is vital for addressing inequity in our scientific community. Here I will describe our recent studies providing evidence of striking (and growing) gender and racial/ethnic imbalances in reference lists of STEM articles, and evaluate several candidate drivers of those imbalances. I will also discuss practical (and open-access) tools for the mitigation of disparity. 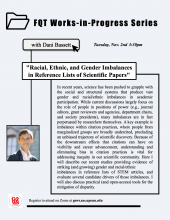