Join Professor W.D. Palmer and SP2’s Racism Sequence for a talk by Philadelphia activist,writer, and the host of the podcast, “Ona Move w/Mike Africa, Jr.”

Mike Africa, Jr. is the star of the 2020 HBO documentary, “40 Years a Prisoner.” The film tells the story of his tireless efforts to secure the release of his parents, Mike and Debbie Africa, from prison following their arrest and 100-year sentence after the 1978 confrontation between police and MOVE in Powelton Village. 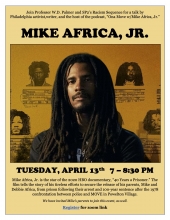