In recognition of International Women's Day and sexual Assault Awareness month, the Center for Global Women's Healthand the Office of Global Health Affairs present the Soad Hussein Hassan Global Scholar Lecture featuring Christina Lamb. In her book Our Bodies, Their Battlefield, Christina gives voice to women in conflict, exposing the world's most neglected war crime-- the use of rape in modern warfare as a weapon to humilate, terrify, and carry out ethnic cleansing. A donation for this speaking engagement will be made to the Panzi Foundation, fouded by Nobel Laureate, Dr. Denis Mukwege who was the 2016 recipient of Penn Nursing's Refield Award.

Christina Lamb is one of Britain’s leading foreign correspondents and a bestselling author.  She has reported from most of the world’s hotspots starting with Afghanistan after an unexpected wedding invitation led her to Karachi in 1987 when she was just 22. She moved to Peshawar to cover the mujaheddin fighting the Soviet Union and within two years she had been named Young Journalist of the Year. Since then she has won 15 major awards including five times being named Foreign Correspondent of the Year and Europe’s top war reporting prize, the Prix Bayeux. She was made an OBE by the Queen in 2013 and is an honorary fellow of University College, Oxford. 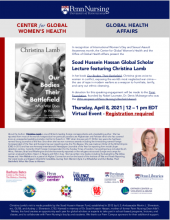