A conversation with NATIONAL BOOK AWARD FINALIST KARLA CORNEJO VILLAVICENCIO, DOCUMENTARY FILMMAKER KRISTAL SOTOMAYOR, and ASSOCIATE DIRECTOR OF LA CASA LATINA KARELI LIZARRAGA for a conversation on QueeringLatinx: Imagining Inclusive Urban Spaces. We will view a short clip of the film EXPANDING SANCTUARY, hear Karla Cornejo Villavicencio read from her new work, and think collaboratively about how we imagine inclusive urban spaces and make and define our families under new circumstances.

This event is part of the series Transdisciplinary Urbanism in Times of Precarity, which emphasizes that times of crisis and precarity produce challenges to urban space, processes, and infrastructure that mirror and often heighten changing realities.

With the publication of her debut book, The Undocumented Americans, Karla Cornejo Villavicencio became the first undocumented finalist for a National Book Award. Her book was also named by Barack Obama as one of his favorite books of 2020 and was selected as one of the best books of the year by The New York Times, Time, NPR, The LA Times, The New York Public Library, Book Riot, Vulture, and the Library Journal. The Undocumented Americans is also a finalist for the National Book Critics Circle award for best first book. Karla has written about immigration, music, beauty, and mental illness for The New York Times, The New Yorker, The Atlantic, The New Republic, Glamour, Elle, Vogue, n+1, and The New Inquiry, among others. She lives in New Haven with her partner and their dog. She is a graduate of Harvard University and a doctoral candidate in the American Studies program at Yale.

Kristal Sotomayor is a bilingual Latinx documentary filmmaker, festival programmer, and freelance journalist based in Philadelphia. Currently, they are in post-production on Expanding Sanctuary, an independent short documentary about the historic end to police surveillance organized by nonprofit Juntos and the Latinx immigrant community in South Philadelphia. Kristal is a 2020 IF/Then North Shorts Resident and Grantee, 2020 DCTV Docu Work-In-Progress Lab, 2020 Justice For My Sister Sci-Fi Screenwriting Lab Fellow, 2019 Good Pitch Local: Philadelphia grantee, 2018 Leeway Foundation Art & Change grantee, and 2017 NeXtDoc Fellow. They serve as the Programming Director of the Philadelphia Latino Film Festival and are a Co-Founder of ¡Presente! Media. Formerly, Kristal was the Communications and Outreach Coordinator at Scribe Video Center. Kristal’s journalistic background includes having written for ITVS, AL DÍA, WHYY, and Documentary Magazine. They are a recipient of the Sundance Institute Press Inclusion Initiative, TIFF Media Inclusion Initiative, the inaugural International Documentary Association (IDA) Magazine Editorial Fellowship, AARP Freelance Fellowship at NLGJA | The Association of LGBTQ Journalists, and the Lenfest Next Generation Fund.

LGBT Center, the Center for Hispanic Excellence - La Casa Latina, and Weitzman School of Design, with support of the Provost’s Office Excellence Through Diversity fund 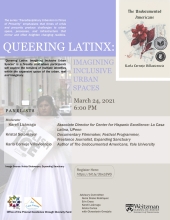