Join the Center for Experimental Ethnography for a virtual Third Thursday event, where Ricardo Bracho will be in conversation with Jennifer Ponce de León. Ricardo will be discussing current projects.

Ricardo Bracho is currently Sachs Artist-in-Residence in the Gender, Sexuality & Women's Studies program, where he teaches creative and critical writing. His plays have been staged read, workshopped, and premiered in theaters and at universities nationwide. He has a committed focus on working with feminist, queer, Latiina/o, community-based, and experimental theaters including Mabou Mines, INTAR, and Company of Angels. His plays have also been staged read and workshopped at Vassar, Stanford, DePaul University, and the University of California campuses at Riverside, Berkeley, Irvine, Santa Cruz, and Santa Barbara. His past academic appointments include Artist/Scholar-in-Residence at the Center for Chicano Studies at UC Santa Barbara and the Multicultural Faculty position at The Theatre School at DePaul University. His plays include The Sweetest Hangover, Sissy, Mexican Psychotic, and Puto. He has worked in independent film and video as an art director, in casting, and as a script, grant, and editorial consultant, primarily with queer, black, and brown makers, including Augie Robles, Cauleen Smith, and Ela Troyano.

Jennifer Ponce de León (formerly Jennifer Flores Sternad) is an interdisciplinary scholar whose research focuses on cultural production and antisystemic movements in the Americas since the 1960s. She works across studies of contemporary visual arts, literature, and performance; transnational Latinx and Latin American studies; Marxist aesthetics; and social theory, including anticolonial and postcolonial thought. She is also faculty in Latin American and Latinx Studies (LALS), affiliated faculty in Gender Sexuality and Women’s Studies (GSWS) and Cinema Studies, a member of the Graduate Group in Comparative Literature, and a Faculty Fellow at Lauder College House. She was the recipient of the 2020 SAS Dean's Award for Distinguished Teaching by an Assistant Professor. 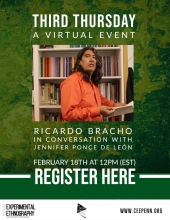