In this talk, Maria Murphy takes up Laurie Anderson’s well known “voice of authority,” a voice processing persona created through an H910 Eventide Harmonizer that Anderson uses to alter the pitch and formant of her voice. Anderson’s “voice of authority” emerged in the 1980s alongside the voices of a series of other “authorities”—of experts including public health institutions, policy makers, legislators, national security advisors, and the Ronald Reagan administration, among others, tasked with solving a range of problems including the Iran hostage crisis and the emerging AIDS epidemic. By examining the technical, timbral, and processed manipulation of Anderson’s acoustic voice, this talk critiques the ostensible sonic properties of authority. 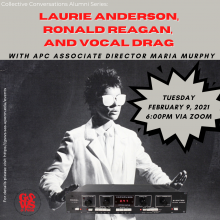