My research sheds light on affective digital labor of digital feminists in their fight to contest technology-facilitated sexual violence (TFSV) and to organize, sustain, and expand their activism. My case study is of the Korea Cyber Sexual Violence Response Center (KCSVRC), a non-profit feminist organization that deals with digital sexual crimes involving spycams and supports their victims. Drawing on feminist scholarship on gender, labor, and technology, I detail the various types of gendered digital labor that Korean feminist activists perform, namely acquiring digital knowledge and skills, dealing with various digital media platforms, such as pornography sites and SNSs, and their policies, and utilizing social media to reach a broad audience so as to heighten social awareness. I reveal this feminist digital labor to be affective in nature, exposing activists to traumatic situations and misogynistic harassment. I finally situate precarious feminist digital labor within Korea’s highly gendered digital economy, in which digital businesses reap profits from non-consensual videos and victims’ sufferings.

Jinsook Kim is a Postdoctoral Fellow with the Center for Advanced Research in Global Communication at the Annenberg School for Communication at the University of Pennsylvania. She earned her Ph.D. in Media Studies from the Department of Radio-Television-Film at the University of Texas at Austin. Her research interests include digital media, online hate culture, and social and political activism in the context of contemporary South Korea. She is currently working on her first book project, tentatively titled Sticky Activism: Online Misogyny and Feminist Anti-Hate Activism in South Korea. Her work on topics in global digital media culture ranging from feminist activism to sports and nationalism has appeared in the peer-reviewed journals Feminist Media Studies, Communication, Culture & Critique, and Communication and Sport. She also has articles forthcoming in Journal of Cinema and Media Studies and Signs: Journal of Women in Culture and Society. 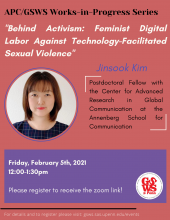