This terrific filim is about a secret language, Nu Shu, developed by women over many centuries in South China. Though as a rule and by custom women were unable to become officially educated, in one region they developed a written language which was passed down from mother to daughter, for female-centric communication.

Film to be followed by discussion with filmmaker, Jing Liu 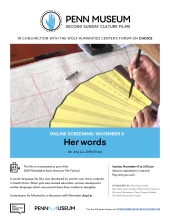