The field of Armenian Studies is on the verge of a sea change. In the last ten years, scholars and artists have made a bid to shift the field's focus to a broader range of new, interdisciplinary and transnational topics through the lenses of critical theory, feminist theory, queer studies, and postcolonial studies. In collaboration with scholars and programs at the University of Pennsylvania, the University of Michigan and San Francisco State University, we are convening an international two-day conference to both mark and shape this auspicious moment.

"Infidelities: New Directions in Armenian Studies" will feature international scholars, curators, filmmakers, visual artists, physical theatre performers and a sound performer, all of whom work either directly in, or tangentially to, Armenian Studies, to flesh out new visions for the field and for the understanding of Armenianness. Over two days, our aim is to center critical, queer-feminist, postcolonial and performative approaches to the study of Armenian history, diaspora, memory, language, culture and displacement within and beyond the Middle East, wider West Asia, and the Americas.

Through a series of panels, performances and working groups focused around the polyvalent provocation of "infidelity," we will focus on a spectrum of lively new directions toward which Armenian Studies is currently moving: feminist and queer interventions; cultural studies of hybrid and syncretic identities; aesthetic imaginings of Armenité beyond text and language; new materialisms and revolutionary change in a postsocialist setting; utopian futures beyond the nation-state; necropolitics, post-memory, and alternative imaginaries of the archive; as well as postcolonial critiques and visions of "reconciliation."

At the intersection of the social sciences, the humanities, and the arts, "Infidelities" seeks to open the putative identity "Armenian" to a wide and open-ended field of critical, reflective study and learning. It will augment new avenues for thinking within Armenian Studies through dialogue with scholars positioned outside of the field through interdisciplinary panels that will address an array of topics, including: legacies of land, memory and trauma; urban place-making in displacement; gendered and racialized embodiment and its discontents across various and hybrid geographies; re-imagining of archives; and queering approaches to culture through experimental film, performance, and sound that decenter nationalism, heteropatriarchy, and the re/production of prescribed identities both in the diaspora and in Armenia itself. 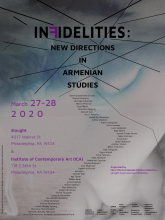