Canceled: “For Tomorrow For Tonight”: Thai Cinema and the Expansion of Queer Politics with Arnika Fuhrmann

Arnika Fuhrmann is an interdisciplinary scholar of Southeast Asia, working at the intersections of the region’s aesthetic and political modernities. Her work seeks to model an approach to the study of Southeast Asia that is informed by affect, gender, urban, and media theory and anchored in thorough cultural, linguistic, and historical knowledge of the region. It stresses a translocal focus that manifests in both geographically and theoretically comparative frameworks. Her book Ghostly Desires: Queer Sexuality and Vernacular Buddhism in Contemporary Thai Cinema (Duke University Press, 2016) examines how Buddhist-coded anachronisms of haunting figure struggles over sexuality, personhood, and notions of collectivity in contemporary Thai cinema and political rhetoric. In her current research project, Digital Futures: South/east Asian Media Temporalities and the Expansion of the Sphere of Politics, Fuhrmann focuses on new media and how the study of the digital allows for a perspective on the political public sphere that transcends commonplace distinctions between liberalism and illiberalism. This project intersects with her interests in the transformation of cities in contemporary Southeast and East Asia. Fuhrmann’s recent writing has appeared in Diogenes, positions: asia critique, Discourse: Journal for Theoretical Studies in Media and Culture, and Oriens Extremus. She is part of the editorial collective of the journal positions: asia critique. Complementing her academic work, she also engages in cultural programming and works in the curatorial team of the Asian Film Festival Berlin.

Arnika Fuhrmann explores new work in Thai cinema in which queerness lies not only in the cross-gender, interspecies, supernatural, and geontological elements of the stories and films, but also in the affective and aesthetic approaches that characterize this cinema. In what ways does this cinema draw on Buddhism to present political critique and represent queerness in innovative ways? 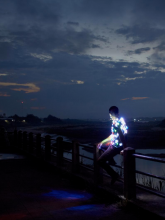