In her 2000 lecture turned book Antigone’s Claim, Judith Butler engages with Sophocles’ play Antigonebecause she is curious about “what happened to those feminist efforts to confront and defy the state” (Butler 1). In this Ancient Greek tragedy, a young woman resists the king by burying her brother against a direct order not to, thus putting her own values and kinship ties above the state. She does not survive this act of rebellion. In her 2017 novel Home Fire, Pakistani British writer Kamila Shamsie re-tells the story of Antigone in contemporary London and with a cast of Muslim British characters.
This paper will ponder the resonance of the story of a woman resisting the state, and if Antigone and her sisters and daughters can inspire political activism today. I will argue that women are almost never fully enfranchised into any state, not even in imaginary utopias like the Amazons of Wonder Woman or the all-female society of Charlotte Gilman Perkins’ Herland. Even so, however, fiction has tried to work against women's status as never fully enfranchised citizens. Inspired by new storylines of reality, like Meghan Markle's renegotiation of her status in the British royal family, and by fiction such as the Netflix series The Crown and Casey McQuiston's Red White and Royal Blue (2019) as well as Katharine McGee's novelAmerican Royals (2019), I hope to find out what stories of women and the state we can tell that do not end in death, unlike Antigone’s.

This paper turns to aftermath of the concert by Lebanese band, Mashrou Leila, in Egypt in September of 2018, where several people were arrested after images of audience members raising the rainbow flag in solidarity with the band’s openly-queer lead singer spread online. While international press diagnosed this as either a showing of power by the security state or evidence of foreign infiltration, this paper offers that panics about the body are also always about pleasure. It examines the production of the Egyptian musalsal, or Arabic-language television drama, Awalem Khafeya (“Hidden Worlds”) which adapted these events into its storyline. It compares this restaging to the evangelist Hell House, or the evangelical church's alternative, theatrical version of the secular Haunted House, which borrows from theater to convert the unconverted, but which also betrays a vulnerability that must continually be asserted in the face of transgression. Both productions involve a desire to locate channels of exposure and corruption and render them visible, locatable, and legible. This work is particularly interested in the tropes of fear, corruption, and exposure of this restaging, but also the elements of fun, humor, and darkness which are always part of an ambivalent constellation of feelings undergirding panic. In this way, it departs from a conspiratorial or directed analytic of power which is located in the battlefield between state and citizen, or East and West, but one which is located in the very act of restaging. 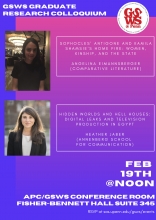