Denice Frohman is a poet, performer, and educator from New York City. A CantoMundo Fellow, she’s received residencies and awards from the National Association of Latino Arts & Cultures, Leeway Foundation, Blue Mountain Center, and is a Tin House Workshop alum.

Her work has appeared in Nepantla: An Anthology for Queer Poets of Color, What Saves Us: Poems of Empathy and Outrage in the Age of Trump, ESPNW and garnered over 10 million views online. A former Women of the World Poetry Slam Champion, she’s featured on national and international stages from The Apollo to The White House, and over 200 colleges and universities. She has a Master’s in Education and co-organizes #PoetsforPuertoRico. She lives in Philadelphia.

The Lecture Series on the Synthetic previously hosted Charles Davis and Solmaz Sharif in Conversation. 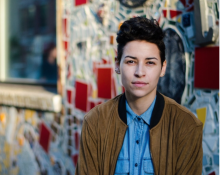