My dissertation offers a feminist socio-legal analysis of the sexual assault law in the wake of major legal reforms in Turkey. My analysis is based on an extensive fieldwork spanning over four years between 2012 and 2016 and consists of documentary research, including the collection of forensic reports, case files, legal texts and conventions, and parliamentary records; in-depth interviews with prosecutors, judges, forensic experts, and lawyers; and court observations in rape trials as well as participant observation in activist meetings and in-depth interviews with activists. Throughout the dissertation, by drawing on Carol Smart’s concept of “field of law,” I examine the different layers and dimensions of the sexual assault law in Turkey and make a comprehensive and systematic analysis of the gendered workings of the state and state institutions, specifically the legal and medico-legal institutions.

In my presentation at the Graduate Student Colloquium, I will primarily focus on “the practice of the law,” and discuss the production of the discourse that sexual assault leaves a permanent damage on the mental health of survivors. The redefinition of sexual violence as a form of violence that can be traced and evidenced through the examination of the body and the mind of sexual assault survivors calls for the production and the circulation of a variety of expert and scientific knowledges and practices. Through these forms of knowledge and practices, not only sexual violence is medicalized and psychiatrized, but also the law (and the state) reinstates itself as an impartial and objective authority that relies on expert knowledge and scientific evidence. By offering a feminist lens on Timothy Mitchell’s conceptualization of “state effect,” I will show how the reproduction of “state effect” within the context of the contemporary practice of the sexual assault law is a significantly gendered process: it relies on, on the one side, the subjection of survivors to an invasive examination process, and, on the other, the production of a gendered understanding of mental damage in sexual violence cases that depends on the reinstatement of norms of honor, chastity, and morality for women, rather than violation of bodily integrity and/or sexual freedom. I will conclude with a discussion of the Supreme Court statement that “no woman would lie about an event concerning her honor and chastity” as a rather perverse reinterpretation of the feminist principle of survivor’s statement to further illustrate my argument.

This research interrogates how people adapt in their daily lives, rather than the macro-level adaptations commonly thought of in climate adaptation discourse. The Sundarban mangrove forest in India and Bangladesh is one of the places most affected by climate change globally, where residents are actively battling against salt intrusion on their lands. As fields get flooded, seasons are wrong, saline ingress, farmers are no longer able to work. This project examines how Sundarbans residents adaptations to climate change are reshaping daily life. What does adaptation look like at an individual or household level? From conducting six months of fieldwork, I have found that, in the Sundarbans, people’s lives are constricted by mounting labor requirements of various forms. Thus, I conceptualize the changes in their lives through the lens of work, or what I call “adaptation labor”. Adaptation labor includes new or modified work that takes place due to ecological changes. Ultimately, adaptation labor is one example of an everyday adaptation that works to give people, especially poor ones in the Global South, agency in their active roles in adaptation.

Lunch will be provided.
Please RSVP to Alicia Meyer for pre-circulated reading: aliciame@sas.upenn.edu 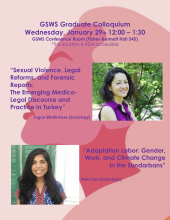