Directed by Pia Andell, Y in Vyborg (2005) is a compilation of home movies taken by an average family in Finland who purchased a 16mm camera in 1938. Two young architects, Ragnar and Martta Ypyä, known as Y and Mirri, started to film everyday life in Vyborg. But, one year later, everything changed when the Soviet Union attacked Finland. The Winter War destroyed the city. Although Mirri fled to the countryside with the children, and Y stayed in Vyborg to help repair the bomb damage, they kept filming. Y in Vyborg incorporates their correspondence to shed more light into the depths of that tragic era. The couple and their children survived World War II—and somehow stayed close, despite the traumas of war. Held in collaboration with Wolf Humanities Center's 2019-2020 Forum on Kinship. Andell will join the conversation from Finland following the film!

Little Potato
(dir. Wes Hurley and Nathan Miller, 2017, 14 min.)
Second Sunday Culture Films Series will also showcase Little Potato, an autobiographical story of Wes growing up gay in Soviet Union Russia only to escape with his mother, a mail-order bride, to Seattle. But even in America, he faced a different kind of oppression at the hands of his Christian fundamentalist American dad. 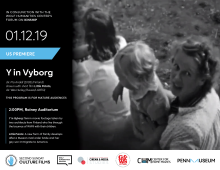