Lunch will be provided

The integration of population-based counterinsurgency (COIN) doctrine has been difficult. Like other military innovations, implementing COIN involved a reorientation in doctrine, education, training, and culture, and an elevation of new positions and areas of expertise. Unsurprisingly, this reorientation has met resistance and posed conceptual and practical challenges. While many scholars have examined the pitfalls and processes of COIN as a military innovation, few have considered the role of gender. Unlike traditional combat operations that primarily rely on masculine “warriors,” counterinsurgency requires cultural sensitivity, state building, and intelligence gathering – soldiers ready “both to fight and to build.” The use of all-female teams, like the Lioness program in Iraq and Female Engagement Team (FET) in Afghanistan, have been framed as essential to force protection and operational effectiveness through enabling searches of women, gathering information and building societal trust through engagement with the female population. I argue that military organizations with higher levels of gender inclusion will have more success with the implementation of COIN doctrine. Moreover, militaries that invest institutional resources in the recruitment and retention of a female force are more likely to develop complementary innovations to assist with the gendered challenges of COIN. I propose that the organized and strategic use of gender difference (as exemplified by FETs) is such a complementary innovation. I use a combination of quantitative indicators – including an original dataset of gender inclusion – as well as process tracing to test my theory.

Shira Pindyck is a PhD Candidate in Political Science at the University of Pennsylvania. Her dissertation research studies the relationship between military innovation and gender, including how tactical and technological changes can challenge existing hierarchies within military organizations. Her research extends from historical case studies of medical innovations, to the experiences of drone pilots, to large-N analysis of the participation of women in militaries world-wide. She holds an M.A. in Government from the Interdisciplinary Center (IDC) in Herzliya, Israel. During 2013-2015, she analyzed counterterrorism policymaking at the Herzl Center at Haifa University, and also conducted research at IDC on public opinion and the content and tone of newspaper coverage.

"Constructing a 'Modern' and 'Scientific' Sexual Self: Exploring the History of Sexology in early 20th century South Asia"

"The only books on sex available to Indian readers are obscene pornographic works…I have consulted diverse authors ranging from Vatsayana and Kokokka to Havelock Ellis and Auguste Forel to produce a scientific and modern book on sexual science in India,”Abul Hasanat in his Bengali work,” Sachitra Jouno Bigyan”(Illustrated Sexual Science) published in 1936. Hasanat’s attempt to produce a modern and scientific book on sexology was not exceptional in early twentieth-century India. From 1920 onwards, several elite middle-class men across the nation became preoccupied with issues of “sexual reform”, “sexual hygiene”, “birth control” and “eugenics.” There was a shared belief among most of such men that ancient Indians had developed sophisticated “scientific” theories on sex which had been subsequently lost. They claimed that the rise of scientific sexology in the West provided them with an opportunity to reformulate those ancient ideas and produce a body of sexual knowledge that was both “modern” and “scientific.”
What did this “modern” and “scientific” version of Indian sexology look like? What did “sexual hygiene” or “eugenics” mean in the Indian context? How were ideas of Western sexology and pre-modern South Asian erotica translated and reformulated to constitute a modern version of Indian sexual science? Was this pursuit merely intellectual or could it be contextualized in the socio-cultural and political realities of early twentieth-century India?

In this paper, I study Hindi, Bengali, and English writings on sexology in early twentieth-century India to reflect on these questions and argue that the emergence of sexology in India was a historically complex phenomenon that was global while simultaneously being deeply embedded in the social, cultural and political realities of colonial India.  Indian sexologists were corresponding with figures like Magnus Hirschfeld and Havelock Ellis while being parallelly invested in the formulation of an “Indian sexual self” commensurate with the politics of anti-colonial nationalism. As I explore this complex history, I would also show how ideas of female sexual pleasure, homosexuality, and masturbation were negotiated within this new sexual imagination.

Arnav Bhattacharya is a third-year Ph.D. student at the Department of History and Sociology of Science at the University of Pennsylvania. He is a historian of modern South Asia and his specific research interests pertain to the histories of sexual sciences, gender, sexuality, and medicine. More broadly, he is interested in exploring the impact of large-scale historical processes such as colonialism, anti-colonial nationalism, religious nationalism and post-colonialism in South Asian history. He has obtained a BA from St. Xavier’s College, Kolkata and an MA in History from Presidency University, Kolkata. For his dissertation, he intends to write a history of sexology between the late 19th and early 20th centuries focusing specifically on North India. Some of the themes that he intends to explore are the broader relationships that sexology had with nationalism, pre-colonial sexual knowledge traditions and social and cultural categories such as caste, class, and religion. 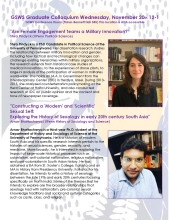