In Vernacular Sovereignties, Manuela Lavinas Picq shows that Indigenous women have long been dynamic political actors who have partaken in international politics and have shaped state practices carrying different forms of resistance. Her research on Ecuador shows that although Kichwa women face over- lapping oppressions from socioeconomic exclusions to sexual violence, they are achieving rights unparalleled in the world. They successfully advocated for women’s participation in the administration of Indigenous justice during the 2008 constitutional reform, creating the first constitution in Latin America to explicitly guarantee the rights of Indigenous women, and the first worldwide to require gender parity in the administration of justice.

Picq argues that Indigenous women are among the important forces re- shaping states in Latin America. She offers empirical research that shows the significance of Indigenous women in international politics and the sophistication of their activism. Indigenous women strategically use international norms to shape legal authority locally, defying Western practices of authority as they build what the author calls vernacular sovereignties. Weaving feminist perspectives with Indigenous studies, this interdisciplinary work expands conceptual debates on state sovereignty.

“In this thoughtful and compelling book, Picq effectively restores Indigenous women to their rightful place in academic and political discourse, thus making a groundbreaking contribution to the fields of gender and Native studies.”—Marc Becker, author of Pachakutik: Indigenous Movements and Electoral Politics in Ecuador

Available at the University of Arizona Press (and on Amazon)

Manuela Lavinas Picq is Professor of International Relations at Universidad San Francisco de Quito (Ecuador), and Loewenstein Fellow in the Departments of Sexuality, Women’s and Gender Studies and Political Science at Amherst College (USA). She has held research positions at Freie Universität (2015), the Institute for Advanced Study (2013), and the Woodrow Wilson Center (2005). Her research focuses on international relations and Indigenous and sexuality politics in Latin America. She is the author of Vernacular Sovereignties: Indigenous Women Challenging World Politics (University of Arizona Press 2018), and co-editor of Sexuality and Translation in World Politics (with Caroline Cottet, E-IR 2019),  Queering Narratives of Modernity (with Maria Amelia Viteri, Peter Lang 2016) and Sexualities in World Politics (with Markus Thiel, Routledge 2015). Her publications appeared in peer-reviewed journals like Latin American Politics and Society, Cahiers du Genre, and International Political Science Review. She contributes to international media outlets and collaborates with indigenous organizations like the Confederation of Kichwa Peoples of Ecuador and the Legal Association for Indigenous Peoples in Guatemala. Her work at the intersection of scholarship, journalism, and  activism led her to be nominated among a New Generation of Public Intellectuals in 2018. 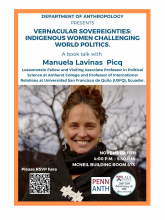