Join Kelly Writers House for a conversation with film critic ELIZABETH WEITZMAN about her newest publication RENEGADE WOMEN IN FILM & TV, an illustrated tribute to groundbreaking women across the history of film and television. Peter Decherney will moderate.

ELIZABETH WEITZMAN is a journalist, film critic, and the author of more than two dozen books for children and young adults. She currently covers movies for the Wrap, and was a critic for the New York Daily News for 15 years. She has interviewed hundreds of celebrities, and written about entertainment for the New York Times, the Village Voice, Marie Claire, Harper’s Bazaar, Interview, and many others. 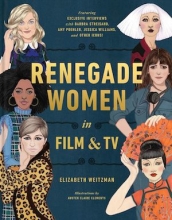