For this noontime presentation, incoming Artist-in-Residence Ricardo A. Bracho will read from his body of work, spanning plays, essays and poetry produced in the last three decades in New York, Los Angeles and the Bay Area as an active and insurgent member of these cities left, queer, artistic and racial-ethnic communities.

Ricardo A. Bracho is a writer, editor and teacher who has worked in community and university, theater and video/film, politics and aesthetics for the past twenty-nine years. His other academic appointments include Visiting Multicultural Faculty at The Theatre School at DePaul University in Chicago and Artist-Scholar in Residence at the Center for Chicano Studies at the University of California at Santa Barbara. His award-winning plays, which include The Sweetest Hangover, Sissy, Puto and Mexican Psychotic have been produced in Los Angeles, New York and San Francisco, as well as workshopped and staged nationwide. His focus in community has been on social justice, public health, and the arts with queer and trans youth of color, Latina/o/x high risk populations, queer men of color, and incarcerated men. He has been a participant in the National Endowment for the Arts/Theatre Communications Group residency program as well as with Mabou Mines. He is currently compiling his selected plays for publication as well as at work on Operation Space Maize, an intergalactic queer comedy and love story about Los Angeles and Galaxy 1-B. 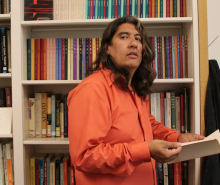