Senior adviser to the Obama Foundation, businesswoman, advocate for social justice, and former government official Valerie Jarrett invites readers into her life on a remarkable journey from her childhood in Iran to the White House and beyond in her new memoir FINDING MY VOICE: My Journey to the West Wing and the Path Forward.  From her work ensuring equality for women and girls, advancing civil rights, reducing gun violence, reforming our criminal justice system, and improving the lives of working families, to the real stories behind some of the most stirring moments of the Obama presidency, Jarrett shares her forthright, optimistic perspective on the importance of leadership and the responsibilities of citizenship. No one has as intimate a view of the Obama Years, nor one that reaches back as many decades, as Jarrett shares in Finding My Voice.

Born in Iran (where her father, a doctor, sought a better job than he could find in segregated America), Jarrett grew up in Chicago in the 60s as racial and gender barriers were being challenged. A single mother stagnating in corporate law, she found her voice in Harold Washington's historic administration, where she began a remarkable journey, ultimately becoming one of the most visible and influential African-American women of the twenty-first century.​ 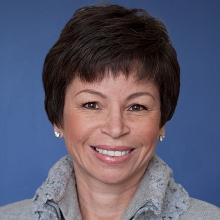