For Asian Americans, the body is a site of regulation that renders individuals racialized, sexualized, and gendered others in the United States. In fact, since Asians arrived, their bodies may be understood as “queer” in relation to white, heteronormative society, ultimately constructed as not-belonging and potentially deviant and destructive to the nation. However, Asian Americans have been/are queering their bodies through performance to disrupt such stereotypes and to imagine alternative futures. This one-day conference explores how questioning Asian American bodies enables important conversations about the intersection of gender, sexuality, and race. We will explore questions such as: How is Asian American masculinity negotiated through the body? How are Asian American female bodies reduced to objects of desire? How are “new” bodies (trans* & mixed-race) emerging in and asserting themselves in Asian America? 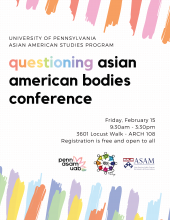