For more information on Women Against the Megaprojectos or to send words of support, please visit the Collectivx Ch'ixi blog or Facebook page

Drawing from her previous work on colonialism, ethnicity and gender in the Andes, Rivera Cusicanqui will give a historical background for understanding the contemporary rise of multifarious networks of collectives and local female organizations, dealing with issues such as indigenous and gender rights, environmental and human rights violations. A common thread that involves most of them is the critique to the State´s megalomaniac vision of “development” by the Evo Morales government in Bolivia.

She will analyze the narratives of several female leaders of indigenous territories that have recently held an Encuentro de Mujeres in La Paz, to discuss the threats posed by the imminent construction of several mega-projects. The Bolivian government has eagerly sponsored these projects, which affect the most important indigenous territories and protected areas in the eastern lowlands of Bolivia. The people of these communities, and specially the women, are painfully feeling the aggressions and threats posed by millionaire highway projects, petroleum and mining enterprises and two of the most ambitious dam building projects of the IIRSA coalition. The gathering, as well as the Women´s March (8th March) shows the importance of reconsidering issues of colonialism, gender and ethnicity in the light of the crisis of male leadership and discourse, as well as in the light of the emerging alliances between urban-rural, mestiza-india and highland-lowland women.

Silvia Rivera Cusicanqui is a contemporary Aymara feminist sociologist, historian, and subaltern theorist from Bolivia.  She draws upon anarchist theory as well as Quecha and Aymara cosmologies.  She is the previous director and longtime member of the Taller de Historia Oral Andina (Workshop on Andean Oral History). She is also an activist who works directly with indigenous movements in Bolivia, such as the Katarista movement and the coca growers movement. Sylvia's best known work is Oppressed But Not Defeated: Peasant Struggles Among the Aymara and Quechua in Bolivia, 1900-1980.

This event is cosponsored by Latin American and Latino Studies Program, Hispanic and Portuguese Studies, The Marginalized Populations Project, the Quechua Language Program and Andean Culture at Penn, and a grant from the Fund to Encourage Women (FEW) of the Trustees' Council of Penn Women. 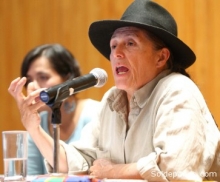