A Century of Queer Korean Literature

As part of a larger translation project called “Of Many Kinds: An Anthology of Queer Korean Literature,” Dr. Perry’s talk examines the works of several writers whose fiction sheds light on popular discourses of non-normative sexuality and gender variance in both colonial and postcolonial Korea, where the affective and erotic experiences of those who have practiced same-sex love have often been at odds with the goals of a heteronormative state. These works of fiction also highlight some of the challenges and responsibilities that adhere to the task of an editor and translator, who is interested in restoring the voices of sexual minorities by way of a fragmented body of literature, sometimes but not always written by queer-identified people. In his talk, Dr. Perry will share what he has found in the archives and some of the struggles of anthologizing and translating queerness within the framework of modern Korean literature. 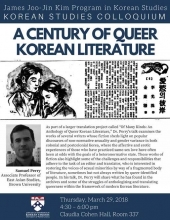