Please note: this location is not ADA accessible.

Listen to the podcast interview on What's Left of Queer Theory Now?

Snorton traces how flesh figures one route into the proverbial question of how matter matters. Juxtaposing the archives of J. Marion Sims, lionized as the father of American gynecology, with the cross-gender maneuvers of fugitive actors in 19th century slave narratives, Snorton frames how transness became conceivable, as a kind of being in the world in which gender though biologized was not fixed but fungible, which is to say, revisable within blackness, as a condition of possibility. Flesh then becomes a crucial analytic for understanding “gender” as a racial arrangement related to shifting, complex and even contradictory understandings of ontology, ethnology and sovereignty in sexology and antebellum U.S. law.

Snorton is a Penn alum, with a Ph.D. in Communication and Culture, with graduate certificates in Africana Studies and Gender & Sexuality Studies. Snorton's research and teaching expertise include cultural theory, queer and transgender theory and history, Africana studies, performance studies, and popular culture. He has published articles in the Black Scholar, the International Journal of Communication, Hypatia: A Journal of Feminist Philosophy, and Souls: A Critical Journal of Black Politics, Culture, and Society. Snorton's most recent book, Black on Both Sides: A Racial History of Trans Identity, identifies multiple intersections between blackness and transness from the mid-nineteenth century to present-day anti-black and anti-trans legislation and violence. He has also been listed as one of "Ten Transgender People You Should Know" by BET.

This event is cosponsored by the LGBT Center 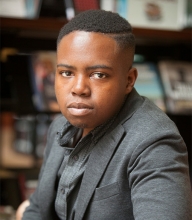