Sponsored by the Department of Africana Studies

Jody Benjamin is Assistant Professor of History at the University of California, Riverside. He received his PhD from Harvard University in the Department of African and African American Studies in 2016. His book manuscript, “The Texture of Change: Cloth, Commerce, and History in West Africa, 1700-1850,” focuses on the production, commerce and consumption of cloth and clothing as a window to understanding social and economic change in the region between Senegal and Guinea (Conakry). This research illuminates African peoplesʼ varied engagements with the global economy in the early modern period. It considers the significance of a regional African indigo cloth economy to wider commercial exchanges, that of India as a source of textiles desired by African merchants, and that of the Indian Ocean generally to West African and Atlantic networks. Before Harvard, he earned an MFA in Non-Fiction Writing from Columbia University and a BA in Black Studies and French from Oberlin College. 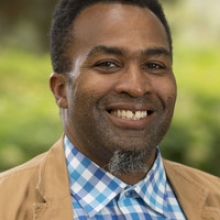