Right, Left, Right: U-Turns and Their Impact in Latin America and the Caribbean

All around the world voters are choosing leaders and policies that promise to break away with the politics of the recent past. From Brexit, to the victory of the No in Colombia’s Peace Accords referendum, to the selection of a political outsider to the U.S. presidency, we are witnessing major shifts in voters’ preferences, which are leading to important changes in legislation and policy-making. In Latin America, after almost two decades of leftist governments and social redistribution policies, right wing governments are back in power in Argentina, Brazil, Peru, and Paraguay, promising to cut down public spending and reversing most of the socio-economic policies of their predecessors. How will Latin American populations, particularly the most vulnerable sectors, be impacted by these political swings? What can we learn from the past? What is likely to happen with the delivery of health services, educational services, urban planning, and protection of the environment in the region? Will drug trafficking and violence recede in Central America, Mexico, Colombia, and Venezuela? What will happen to international trade agreements, such as NAFTA? How will hemispheric migration evolve? These are some of the questions we will reflect upon in the PLAC 3rd Annual Conference, which will bring together colleagues and scholars from multiple disciplines across the University of Pennsylvania. This event will showcase Penn’s outstanding and cutting-edge research on Latin America and the Caribbean.

Sponsored by: Penn in Latin America and the Carribean. Third Annual Conference

For more information, including the conference schedule

Penn in Latin America and the Carribean. Third Annual Conference 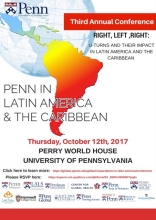