Positions in the Patriarchy: Retooling the Metaphysics of Gender

Decades of feminist theory have approached the question ‘what is gender?’ with an eye to gender as a system— in particular, the system that creates and sustains patriarchy. Using this approach, feminists have proposed theories of gender focused on the social positions that persons occupy within a patriarchal system. These analyses almost uniformly assume a gender binary (men & women), and so look for corresponding, binary social positions. In this talk, I defend the importance of position-based metaphysics of gender, but challenge the assumption that positions in patriarchy can be captured in a binary. Rather than throw out the baby with the bath water, I’ll propose an alternative position-based approach. It begins with modeling the key axes of the patriarchal ‘blueprint’, or the shared beliefs, norms, and attitudes at the core of dominant, western gender ideology. I’ll then build a framework for describing the variety of positions that persons can collectively occupy in relation to this blueprint. A central upshot is that metaphysics intended to illuminate and debunk gender as imagined under a patriarchal system fails to sufficiently achieve this end when it presupposes the same binary framework. The categories men and women, I’ll argue, are not primarily descriptive, but rather, contested tools with the central function of reinforcing or revising social power. 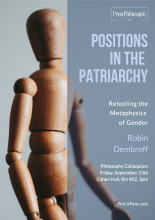